Blood drippin’ down your shirt.

With your herky-jerky, lumbering lurch.

Tearing through their chain link fencing.

Banging down the neighbor’s entry.

Your inhuman strength is oh-so frightening!

Are those brains, gray and mushy,

Spilled upon your dirty feet?

What yellow fangs you’re a baring.

Baseball bats don’t knock you down.

We’ll have to raid the gun collection.

He’ll use his gun to make you dead.

To his shoulder, butt stock goes,

Caveat – You should never point any weapon at any person

and should use a weapon on a zombie

only when absolutely necessary. 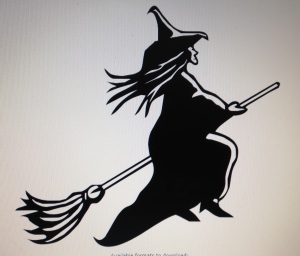 I wrote this in grade school…

Who would ride a broomstick

As the witches do –

Straight across the pebbly stars

On a street of blue?

I should! I should!

(if mother came, too)

Who would take a wildcat,

With eyes all yellow-green

To ride upon his broomstick

I should! I should!

(if mother sat between)

Blood drippin’ down your shirt.

With your herky-jerky, lumbering lurch.

Tearing through their chain link fencing.

Banging down the neighbor’s entry.

Your inhuman strength is oh-so frightening!

Are those brains, gray and mushy,

Spilled upon your dirty feet?

What yellow fangs you’re a baring.

Baseball bats don’t knock you down.

We’ll have to raid the gun collection.

He’ll use his gun to make you dead.

To his shoulder, butt stock goes,

Revealing my dark side

Do you write one genre or do you hop around?

I’m a genre-hopping sort of writer. I think I like horror best of all. I also write experimental, memoir and historical, sprinkle in a little poetry.

I have come to realize that I may not ever write a novel – short stories and poetry seem to be my niche.

Here on the blog, I’ve shared a few poems, experimental fiction, some fiction and non-fiction.

I think it’s time I showed you my dark side.

THE FOLLOWING STORY IS

Chaz had a lifelong weakness for football, golf, baseball – anything he could bet on. When he lost, he had an excuse to hit her. When he won, a large amount of cash got squirreled away in the safe concealed behind the autographed poster of Sandy Koufax in the room he called The Study.  Ruth had never seen him study or even pick up a book unless it was to check the value of one of his collectibles.

Ruth’s attraction to him had been immediate. They met at a party during the sixth game of the World Series, Yankees and somebody. He was tall and had dark, good looks. His eyes used to sparkle, but now they were just brown and mean under heavy brows. When they first married, he would apologize after he hit her, and then flowers or some sweet treat would find their way into her hands. Once he gave her concert tickets for a heavy metal band she couldn’t stand, and a promise to never do it again. That promise dried up in a couple days.

The gifts dried up, and then the apologies.

She learned to conceal the bruises.

Chaz also had a weakness for younger women – blondes, brunettes, the occasional redhead. He never brought the women home, nor did Ruth ever see him with anyone, but she found the signs – lingering perfume on a shirt collar, phone numbers written in a feminine hand on a cocktail napkin in his briefcase. She once pulled lacy silk panties out of a suit jacket at the dry cleaner’s counter.

Just last week for the Halloween party, he shaved his mustache down to a pencil and with slicked back hair and wearing fine brocade, he looked like Clark Gable. Ruth’s dark hair and blue eyes had presented well in her Southern Belle costume.

At the costume party, Ruth walked up on a group of his purported friends and heard one of them referring to him not as Chaz, but Cheezie Boy.

“He’s on the short list,” the friend had said.

“That last bad deal puts him over the top. Caught in a lie, too,” someone else said.

Ruth stood just outside the circle, mouth gaping. The offending chatterers reddened when they realized Mrs. Cheezie Boy was standing outside their hush-hush circle. The costumed men started to elbow each other and the circle broke apart.

The next day over dinner, while he doused her homemade lasagna with hot sauce, Ruth made a risky decision. And then she opened her mouth.

“Why would they say you’re on the short list?” She was looking down at her plate, and she didn’t see him glaring at her, red-faced. Out of the corner of her eye, what she saw was Mr. Short List unfold into a standing position. She braced for impact.

The punch to her face had enough wind-up to knock her out of her chair. Splayed on the floor, she saw her bicuspid – or maybe it was a canine – lying in her blood on the recently-polished dining room floor. She pushed herself into a sitting position. He turned back to his dinner and his newspaper.

She sat like a lonely child, staring out the French doors into their fifty-acre garden, all rock and cactus. Working her jaw back and forth, she pushed herself onto all fours. In her mind’s eye, she saw a cartoon camel on knobby shaking legs, a piece of straw floating down out of a cartoon sky, and whoop, the camel collapsed with all four cartoon legs stretched out around his one-humped body. That was her, the cartoon camel.

Ruth did a lurching zombie-walk out of the dining room, through the kitchen and into the garage. Blood from her mouth dripped onto her T-shirt and created a Jackson Pollock-like drizzle along her jeans.

In the garage, she put his golf glove on and hefted his titanium driver casually onto her shoulder, holding it with one hand. A decision made, she walked back into the dining room and stood behind him. Hunched over the baseball stats, he ignored her. She squared up, her upper arms close to her torso. In her head Ruth heard her video golf instructor telling her to “Squeeze a little cleavage”. She planted her feet just so and wiggled her hips a little.

He was folding the sports section when the Alpha RX 460cc titanium driver hit him up-side the head.

Her perfect follow-through connected with his skull and a satisfying ping! resonated up through her arms. He tumbled out of his chair, a chunk of the newspaper still clutched in one hand.

“Fore!” Ruth squealed, hopping with delight, brandishing the golf club over her head like a triumphant knight.

She leaned on the driver and pursed her lips. Too much slice.

With one arm, she swept the dining table clear. On the floor, the spatters from her bloody mouth mixed with the sauce from her best-ever lasagna and a woodsy Bordeaux. The fresh blood spatter added an interesting dimension to the Georgia O’Keeffe print on the wall.

She hauled him up and onto the table, grunting, her hands slipping in the blood. she trussed him up with clothesline and bungee cords and duct tape. He reminded her of last season’s six-point buck in the bed of his pick-up.

Once she had him secured to the table, Ruth brought her favorite kitchen cleaver down on his leg. She realized she was getting quite messy and ambled into the bathroom to grab her terry bathrobe.

He hadn’t stirred in quite some time and Ruth was becoming impatient. She looked in on him occasionally, checking the gash in his head and the bound-up stub beneath his fashionable cargo shorts.

“Can dish it out, can’t take it,” Ruth said to his slack-jawed face.

She reached out to touch the pulsing vein in his neck and then gave him an affectionate pat. Blood had pooled and dried where his foot used to be. His eyes were sunken, dark smudges underneath. A bruise appeared around the gash in his head at the hairline. The colors reminded Ruth of southwest sunsets reflected against strings of clouds. She smiled, the gap in her once-perfect smile a red inkblot in her porcelain complexion.

She leaned over his face to check his breathing. His eyes flashed open. He tried to raise his head. He struggled for several moments against the duct tape over his forehead and the rope around his neck.

“You bitch! You-” He made a choking sound, the pain below his knee registering. His eyes moved frantically back and forth. He looked down, eyes bulging when he saw the stump where his foot used to be. He screamed and started to writhe. “Oh good, you’re awake.” Ruth brought the cleaver down on his right forearm. “Hey-aa!” she yelled in her best kung-fu-master voice. Ruth pulled the lacy panties out of a bathrobe pocket. She stuffed the panties in his mouth to muffle the screams.

She wiped the cleaver cautiously back and forth on her bathrobe. She inspected the blade, her fingers giving it a gentle caress. Straining against his confinement, he saw the vultures outside fighting over the last bits of his leg, the shoe still on the foot, the sock soaked with blood. He blacked out.

“Oh darn. Chaz? Cheezie Boy?” Ruth gave his cheek a pat-pat. She placed the cleaver, carefully, like an artist with a favorite brush, on the table. Whistling, she ambled into the kitchen to grab a cold beer.

A chilly November breeze drifted off the Sandia Mountains. Ruth sat on the porch overlooking the garden. She was comfy in a rustic wooden rocker, her booted feet crossed at the ankles and propped on the rail. A soulful country love song wafted through the doors, riding along on the coppery smell. In one hand she held a cold long-neck of Corona, a wedge of lime floating inside.

In her other hand was his arm. Ruth had a grip on the wrist, and raised the hand to scratch her nose. She leaned forward and tossed the arm underhand into the garden. She watched it arc and land with a feeble splat on a landscape slab of gleaming black slate.

His wedding band made a ting when it landed. A couple of large birds hopped over to sample the new course in their gruesome buffet.

With bloodied fingers Ruth reached into a bag of white corn chips and plucked out a perfect triangle, dipping into a jar of salsa. She moved the chip toward her mouth. A dollop of salsa plopped onto her jeans. She put down the empty beer bottle and with a forefinger swept up the wayward tomato and jalapeno and poked it back onto her perfect chip. She munched contentedly.

A crunching noise on the stone driveway made Ruth sit up. She planted her booted feet to still the rocker. She stopped chewing. The familiar vroom! before the engine was turned off and she knew it was her mother-in-law come for yet another unannounced visit.

On her way back through the dining room, Ruth retrieved the cleaver from the table. She stood in front of the foyer mirror and straightened the soiled robe and fussed a bit with her hair. She smiled at Other Ruth in the mirror and picked at what she thought might be a pimple on her cheek. A fleck of bone fell away. She was glad it wasn’t a pimple.

Ruth stood quietly, watching the doorknob, and waited for the front door to swing open.