My history with horses

For the last four years, I’ve been involved in politics, protests, and purpose. I know more about this president’s* administration that I ever thought possible. It’s been a lot of bad news, punctuated occasionally with positive news for the side of good and for human rights. It’s been rather exhausting.

Just last week, I saw this picture (above) of a horse and young rider, nose to nose. The picture is not epic, just a girl and her horse. But something happened to me when I saw this photo. I started to have flashbacks; I was brought to tears. I realized what I’ve been missing is HORSE.

I exchanged messages with the originator of the post, and it turns out – that family is from North Dakota!

I remembered a lot of incredible experiences I’ve had over the years, hence…

My History With Horses

I remember watching this Philly-area TV show when I was about 5-6 years old. I remember Mom and Ang buying me a Sally Starr costume – vest, skirt (complete with fringes) and boots. I wore that outfit to bed. Mom didn’t want me to wear the boots to bed, Ang said, [sic] “Let her.”

Patches in the backyard

When I was about 8 years old, Ang rented a pony for my backyard birthday party. We had a pony in the backyard in suburban Wilmington! People came from far and wide. The pony’s name was Patches (skewbald or piebald, can’t remember which). But he was in my backyard.

I remember a time I went with Ang to a racetrack in Maryland, guests of her boss. Ang told me, “You pick the horses, I’ll place the bets.” My picks were personal –  because I thought the horse was pretty, or I liked the name listed in the program. I picked seven winners (win, place, show) that day. Ang kept the bills and she gave me all the change.

I lived in Maine briefly in the late 70s. A neighbor had two Percheron draught horses, and I was able to visit them occasionally. I got on once – with the aid of a stepladder. Those beasts were so huge, I felt like I was doing a split.

Formerly the DuPont Pony Club mentioned above, now trail rides and instruction. It was nice to ride, but carefully orchestrated so not as fun as free range.

I once rode a retired racehorse somewhere in Maryland – the Where and Why and What-fors are sketchy. I mounted, and it was like zero to a hundred in a car, only no seat or seatbelt. Actually, no steering wheel either – I lost the reins. Come to think of it, I lost both stirrups, too. It was terrifying and thrilling.

Somewhere in my late 30s/early 40s, I worked for a Campbell Soup heiress in Pennsylvania (filthy, stinking rich). Our crew cared for over a dozen horses, all with fancy, snooty show names. I never got to ride there, but it was good therapy, to curry, brush, bathe. And muck. And one of the most physically exhausting jobs I ever had.

I hadn’t been on a horse in over a decade (probably closer to two decades). I went on a ride with a private owner, up around Madrid (pronounced MAD-rid). I remember we rode through town, right down the main street. Again, the galloping scared me, but I’d been out of practice for quite a while.

For those who have exercised muscles believed long dead, my thighs had a fire-breathing vengeance against me days later, and I thought I’d never walk normally again.

I’ve been bitten by horses, I’ve been stepped on and kicked, I’ve been squished up against the stall wall, and I’d still rather spend a few hours with a horse than with most people.

Do you have any experiences with horses? Share pictures!

Do you prefer English or Western? 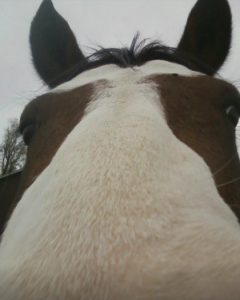